Berlin – The City that Goes ;)

Many articles in magazines like QG and National Geographic Traveller describe Berlin as one of the coolest cities in the world. Low rents coupled with a very cosmopolitan population and the ever present contrast between the East and the West of the city means that there is something for everyone in Berlin.

These are of course the generic reasons for liking Berlin. Of course I like the contrast between East and West and how it still affects life in this huge metropolis – in what other city can you club in an old, defunct factory, walk past a car dealership that displays a Bugatti Veyron  and get verbally abused by prostitutes on your way to the hotel? 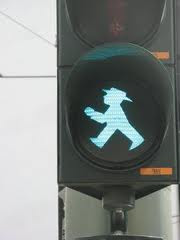 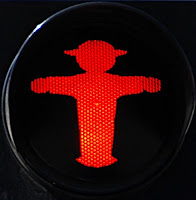 This is nice but then again a cup of tea is nice. What I like about the city is its quirkiness, it seems like Berlin is trying to be different in all facets all of the time. The most pertinent example is the robot men that originated in Berlin. These so-called Ampelmannchen were used in the old East Berlin but after the 1990 reunification the whole city adopted these funky red and green East Berliners as their own and they are also used throughout he whole Germany nowaday - especially in Saxony-Anhalt.  If you are into curios it is the Berlin version of the vuvuzela. 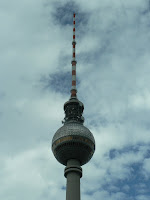 Other examples include the Berlin skyline that is dominated by an old East Bloc television tower. After the wall was broken down this tower broadcast political propaganda – they told the East Berliners that the people that were flowing out of East Berlin were only tourist who wanted to see what the West looked like. Some people like the tower, I don`t like it at all it looks like it might explode and cover the city in yellow puss. 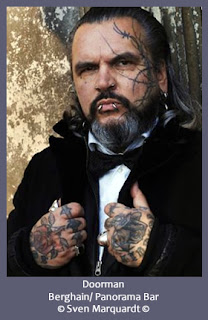 Aesthetics aside the city folks are also constantly striving to differentiate themselves. Seeing a person with a tattooed face is not out of the ordinary. I saw this one guy who sported a beard,  a floral dress and a pair of Dr Martin`s and the person who caught the most eyes was me since I was laughing like a maniac. One guy who has achieved a certain level of notoriety is the doorman at Berghain (one of the most famous clubs in the world I`m told).
All in all Berlin has something for everyone. If you are a history buff the marks left by the struggle against the Axis and Allies are still there the same goes for the Cold War. If you like art and design your heart will be content. If you are up for a good time Berlin is “poor but sexy.” I could go one but all that I`m saying is if you ever have the chance give the place a try - you`ll like it.
Posted by Gys Hough at 16:30 1 comment:

A South African friend of mine, who happened to do an internship in Berlin, told me to do some enquiry into a group of German people known as the Schwabs. All clues that she gave me is that they come from the south of Germany and don`t smile. 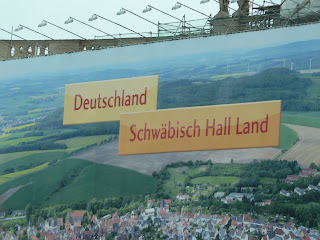 One week went by and my research prospects were looking bleak. Time and opportunity overlapped in the square in front of Humboldt University in front of a building wide poster that claimed that Germany is Schwabisch Hall country. Swabish Hall is the local bank of the Schwabian people. They are one of the original three tribes of Germany the other being the Baden and the Bavarians.
This prompted a few questions about Schwabianism in the bus. When asking these questions I noticed that all three of the Schwabians in the German group happened to be sitting next to me in the bus – hence the title. In Schwabialand the importance of saving as much money as possible is very important. The main goal of all this saving is eventually building your own house and keeping the porch as clean as possible. Simple as that.
This Schwabian work ethic has lead to major technological advances and some companies you might know of such as Hugo Boss, Daimler Benz and Boehringer Ingelheim. Apart from these achievements the Schwabs aren`t well loved in Germany. They are known for letting Berlin`s low housing prices escalate and an easy way of making friends in Berlin in saying “Scheisse (shit) Schwaben” as much as possible.
Posted by Gys Hough at 18:14 No comments:

I`ve been in Germany for an exchange programme and I was to busy to write anything lately. I usually don`t write in English but for the benefit of my German friends I`m going to share some of my more interesting German experiences in English.

I got the opportunity to visit three German cities namely Munich, Berlin and Cologne. Every city is very different. Two main reasons for this exists. Firstly you have a host of provincial differences in living life that gets reflected in the buildings.  Secondly, the different ways in which the leaders of every city decided to react to the challenge of rebuilding their cities after it was bombed to the ground was somewhat different.
Berlin and Cologne decided to modernize while Munich went the more conservative direction. Munich was originally one of those medieval towns that were surrounded by the city walls and gates where farmers sold their wares in St Mary`s Square now known as Marianplatz. This historic part of town is still there and is still used to sell produce although the supply of farm produce has been replaced with luxury brands. 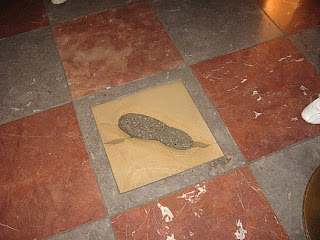 Apart from the places of consumerist worship there are also many places of the more conventional religious worship. Within one of these cathedrals there happens to be a footprint that is exactly dead centre in line with the cross. This is called the devil`s footprint and although many different variations of this story exists I`ll retell the version I heard in the cathedral.
The builder of the cathedral was faced by an enormous amount of setbacks that varied from structures toppling over to problems with the supply of raw materials. The builder came to the conclusion that the devil was putting in an extra effort to the delay the finishing of this place of worship and decided to strike a deal with the devil.
He promised the devil that he will finish the building without any windows if he would not interfere with the rest of the process. The devil obliged, delighted that nobody would like to worship in a cold building without any stained glass windows. When the devil, who used his friend the wind for transportation, went to inspect the site he was delighted to see how dark and cold it was.
What the devil did not know is that the builder made use of planks to hide the beautiful windows that eventually adorned the walls of the cathedral. When the devil eventually noticed that he had a fit of rage and walked out of the cathedral after stamping his foot. In this fit the devil forgot to take the wind with him hence the constant howling wind in the area of the cathedral.
When our group got to the footprint one of the Germans put his foot, that happened to be the exact size as the devil`s (a European 44 – UK 9) on that of the devil before being verbally escorted out of the cathedral. 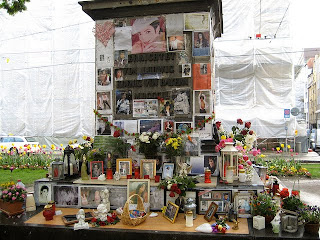 Around the corner there is a statue in honour of some composer whose name I cannot remember. His name is not important seeing that after the death of Michael Jackson the statue got converted into an impromptu and very freaky shrine to the late king of pop where he is venerated Roman Catholic style. There is even a woman that prayed in front of it. All this because MJ once stayed at the hotel on the opposite side of the road.
Posted by Gys Hough at 17:09 1 comment: